Laureate of The Zbigniew Herbert Award 2022 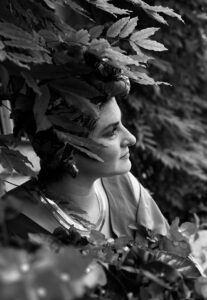 Marianna Kiyanovska is a Ukrainian poet, an essayist, translator, literary animator, member of the Ukrainian Association of Writers as well as PEN Ukraine.

She was born on November 17th 1973 in the town of Zhovkva (Nesterov in Soviet times), near Lviv. She completed a degree in Ukrainian Studies at Ivan Franko National University of Lviv. During her studies she co-founded ММЮННА ТУГА (MMJUNNA TUHA), an all-female poetry group, whilst her first work, a volume of poems titled »Інкарнація« (Reincarnation), was published in 1997. From that time she has published over a dozen poetry books.

From the Polish she has, amongst others, translated poetry by Bolesław Leśmian and Julian Tuwim, as well as the works of living poets of the younger generation, including Tadeusz Dąbrowski, Roman Honeta, Eugeniusz Tkaczyszyn-Dycki and Adam Wiedemann. She also undertook the translation of Adam Mickiewicz’s »Dziady« (Forefather’ Eve). For her translation work, she was decorated with the Zasłużony dla Kultury Polskiej (Decoration of Honour, Meritorious for Polish Culture) by Poland’s Minister of Culture and National Heritage.
In 2017 she published »Бабин Яр. Голосами« (The Voices of Babyn Yar), for which she received Ukraine’s prestigious Shevchenko National Prize. The poetry collection commemorates the victims of the mass murder committed in Babyn Yar near Kyiv, during World War II, where nearly thirty-four thousand Jews died. As well as the victims of an earlier Bolshevik purge and of the Great Famine, whose remains also lie in Babyn Yar.

The Polish version of »The Voices of Babyn Yar« was translated by Adam Pomorski and received the European Poet of Freedom Award from the city of Gdańsk, which Marianna Kiyanovska collected in June 2022. During the ceremony the poet underlined that her poems speak not only of the tragic events from the past, but also of the present: “during my childhood my we did not speak about Jews and the Shoah (The Holocaust). Neither about the Holodomor (Great Famine). Zhovkva, the town of my birth and where I grew up, did not remember its Jews, or its Poles. I have no family recollections of the tragedy at Babyn Yar. The Holocaust was and will always remain, together with the Holodomor and the Volyn Tragedy “coexistent” for me. Today it has become “coexistent” with the genocide committed on Ukrainians during this war. This volume of poems links two wars for me.” She also underlined the historic nature of the times that we are living in:

today, we Ukrainians are overcoming the incompleteness of our memory, and at the same time, the incompleteness of Europe’s memory as well as that of the world, about us. We aim to create cognitive tools, narratives to finally speak a “full language”. For thus far Ukrain’s national and political language, in the face of the tragedy and crimes on this scale, has been incomplete and inadequate. Our language is presently “growing up”. At the same time, the language of Europe’s entire body politic is “growing up”. Europe is regaining the dignity enabling it to talk about the genocides of the 20th century, not only as “seas of blood”, but as the terrible consequence of a period […] when millions of people irretrievably lost the ability to distinguish between good and evil in their daily lives, set beyond the boundaries of common sense. Zygmunt Bauman wrote that primarily techbologies made such a mass extermination of Jews possible: railways, administration, and the automation of bureaucratic processes. On the other hand, I am convinced that the mass extermination of Jews was possible mainly thanks to the imagination, or rather the way technology expanded the boundaries of imagination, surpassing the limits of things possible. Russia’s contemporary political reality, fascism, is based on an imagination that has supplanted memory.

She finally endeavoured to convince that: “I don’t like the concept of a “globalized world”. Better to think about the “whole world” as a place, where we think and exist. Today Poland repeats after the Polish Pope, John Paul II: “Do not be afraid!” These words, together with Christ’s commandment to love thine neighbour, are in my view the first barrier to the madness of self-destruction”.
Marianna Kiyanovska’s poetry has also been translated by, amongst others, Jerzy Litwiniuk, Aneta Kamińska (her work can be found in an anthology titled »Orange Pieces. New Ukrainian Poetry«, 2011) as well as from the previously mentioned Adam Pomorski. Critic Paulina Małochleb thus commented on his work: “In the Polish version, he not only managed to keep the character’s personalized language, but also the different cadence of speech of both city hooligans as well as their saintly grandparents, but above all, to keep Kiyanovska’s pulsating, disturbing rhythm […] this poem runs fast and true, rhymes fully convey the ravine’s stuffiness, heat and sand”.

What they say and write about Marianna Kiyanovska…

Marianna Kiyanovska has been one of the leading voices of Ukrainian poetry over the last two decades. Her dazzling career began in the mid 1990’s as a student of Lviv University, and co-founder of the exceptional all-female “MYUNNA TUHA” poetry group. From that time her work lies at the centre of Ukraine’s literary life. Kiyanovska has published fourteen volumes of poetry, that continue to exert a great influence on her fellow poets, as well as echo well beyond that poetic circle”.

Her decisive book was published in 2017 under the title »Бабин Яр. Голосами« (The Voices of Babyn Yar) – a deeply moving and masterly work, dedicated to the victims of the Holocaust, killings carried out near Kyiv in 1941. The poetry of this selection can best be described as “mediumistic”: the author is as if a mouthpiece for the victims who recount their experiences through her poetry.

It is also very much worth noting Kiyanovska’s great contribution as translator of Polish poetry – by Tuwim, Leśmian and other authors.

And finally: I am delighted, that The Zbigniew Herbert Award will end up in the poet’s home town – as Marianna Kiyanovska does indeed live in Lviv.

This collection of poetic works »Voices of Babyn Yar«; this, Marianna Kiyanovska’s opus magnum, combines a variety of trends and strands of her work. This collection – very novel, is all at once a milestone of Ukrainian poetry – is worthy of the poetic testimony of the Holocaust in popular literature.

In the choir’s polyphony, Paul Celan’s “Fugue of Death”, returns with an echo subdued to a whisper, but this polyphony also stems from translation practice – and Kiyanovska is a poet whose translations are an indispensable part of her work. Excellent translations of Tuwim and Leśmian’s work revealed the dark horizon of the Polish ballad, which, surprisingly, managed to face up to the subject of the Shoah. Wandering in Kyiv, in Leśmian’s and Janusz Korczak’s footsteps, reveals the topography of the mass crime. Work on translations of contemporary Polish poetry enabled the unlearning of high tones. The imposed intellectual discipline and humanistic erudition resulted in the poet’s literary sketches and essays, which, in a deep understanding of the essence of genocide, fit into the context of English and French-language readings.

The polyphony of “The Voices of Babyn Yar” finally freed the author from the typical construction difficulties of “I” in personal lyricism; however this difficulty grew and over the years became ever more filled with drama. The mediumistic exit from the lyrical limitations required confirmation in the translation of masterpieces: in the already published by the authoress “Medea” Euripides and in Adam Mickiwicz’s “Dziady” (Forefather’ Eve), which translation she undertook. An exit fom darkness into the light.

“In her newest poetic work »The Voices of Babyn Yar« Marianna Kiyanovska, Lviv based Ukrainian poet, author of over a dozen poetry volumes and many tomes of poetry translations from the Polish, dared achieve the impossible – she endeavoured to give the dead a voice.
For the very first time in Ukrainian, this monumental rhyming threnody was written for the victims of the Holocaust: Jews, Ukrainians, Poles, Roma, as well as representatives of all other groups and communities, murdered during World War II by Nazi Germany in Babyn Yar, near Kyiv. In individual poems we hear the voices of children, women, old people – all those without a voice. In individual rhythmical verses the lamenting wailing, charged with profound emotions, Kiyanovska recounts a story of lives and crimes. Stories no less unique, than that of any human existence, at the same time frighteningly universal, because the victim’s voices are an accusation and a charge against crimes committed from many years past, as well as those committed today, often in front of our very eyes. Kiyanovska did not hide that the reasons that led her to writing this book, dedicated to the memory of one of the vilest crimes of the Holocaust, were her personal experiences and stories of the victims in Ukraine’s Donbas region, whilst that war with Russia gave the book a horrifying relevance and authenticity. As if in the voices of Babyn Yar we were hearing the calling of those murdered in Irpień, Bucza or Mariupol.

Over two hundred poems, over two hundred separate and unique human voices make up a shocking lamentation poem. This poetry is so simple and clear that the load of emotions reaches everyone, enabling each reader to understand and feel its message clearly, and it is so elaborate that this voice calling from the darkness can be a choral psalm, a song in a great ceremony of invocation and talking to the dead. A poet from Lviv, an expert and great admirer of Polish poetry, repeats the gesture of Lviv poet Zbigniew Herbert, who pleads for the memory of victims of violence, stands on the side of the weak, defeated, sentenced to death and oblivion, and tries to give a voice to those who demand justice.