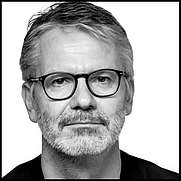 Durs Grünbein was born on October 9, 1962 in Dresden, and thus inevitably in the former GDR, enslaved by the communist regime and its Stasi secret police, all at once in a city that towards the end of World War II fell victim to Allied carpet bombing raids. The poet would later recall: “I was born in Dresden, in Saxony, that is, in a region that has always had a high opinion of its culture, of its aesthetic sensitivity. After the bombings, near the end of the war, the city was one immense baroque ruin, a heap of rubble over which violins whined”. The artist would return to the topic in “Porzellan. Poem vom Untergang meiner Stadt” (“Porcelain. Poem on the Downfall of My City”, a collection published in 2005).
In one of his interviews Grünbein spoke about his childhood and youth spent in the “grey zones” (the title of his first volume of poems). “I lived in a state of a lack of freedom, at best, of its very serious restriction. I saw how people around me suffered; I myself saw how I had to modify my life, because that was what the enslaving power expected of me. There is however something – associated with life under a communist system – that paradoxically turned out to be very inspiring for me. It’s to do with a fascination with antiquity. As young people, curious about the world, we did not have access to a large part of – especially contemporary – art. So we focused mainly on works from ancient times. Though censorship prevented us from reading many, then recent Western novels, they gave us unhindered access to works centuries old.” Over time, Grünbein’s fascination with the culture of ancient Rome would express itself in his work.

The future author of “Misanthrope on Capri” followed Theatre Studies in Berlin, and from the mid-1980s became a freelancer, working with various literary magazine editors. Travels around Europe, Southeast Asia and the United States followed after the fall of the Berlin Wall and the unification of Germany. Grünbein currently lectures on Poetics at the Kunstakademie Düsseldorf (Düsseldorf’s Academy of Fine Arts), and lives in East Berlin.
His poetic debut began in 1988 with the publication of “Grauzone morgens” (“Morning in the Greyzone”). Translator Andrzej Kopacki recounts that Grünbein “entered German literature like a storm, or rather like a Hyperborean wind and in a few years gathered the power of epithets, among which there was no shortage of comparisons to the debuts of Hofmannsthal or (especially) Enzensberger”. Critics readily recognized him as the first great poet of a united Germany, “the first native voice of the new Republic”. The significance of his poems is for instance influenced by the fact that Grünbein – as Germanist Aleksandra Burdziej asserts – “can draw on the possibilities offered by his native language in a virtually virtuosoesque manner”, “uses allusions and associations masterfully”. He is an author who “courageously experiments with words”. Critics emphasized the range of tones that can be found in Grünbein’s work, including irony and sarcasm. American literature researcher Helen Vendler praised its “sardonic humour, the savagery, the violent candour – all expressed in lines of cool formal elegance”, while British critic Philip Oltermann judged that Grünbein “loves to jump from one register to another – one moment he is the street poet of Berlin, the next he comes over all marble and ancient philosophy”.
Grünbein’s refined and intellectually revealing poetry proves that it is possible to formulate philosophical questions within the poem (the flagship example in this instance is the volume devoted to Descartes “Vom Schnee oder Descartes in Deutschland” [On Snow or Descartes in Germany), combining references to his own biography with cultural memory, raising issues related both to morality (for instance the contemporary reluctance to confront death), and science or biology. Especially in his early works, the German poet – asserts Aleksandra Burdziej – “provocatively reduces man to a purely biological being, emphasizes his corporeality and mortality”, moreover – “gives the human individual no chance of escaping the corporeal prison”.

Jakub Ekier, Polish translator and poet, believes: “I do not know if there is another top-flight poet and essayist in the world today who engages in such a multifarious dialogues with creators of the past. Aeschylus and Lucretius, Seneca and Shakespeare… Who is excluded? Naturalists and philosophers of different eras have as much to say to the German author – and via him to us – as people of the pen of the last three millennia. Yes: to say, because poets especially, even the most distant in time and space, for Grünbein are as voices, still unheard in their physicality. It is this physical and human mortality that he ably explores in these post-metaphysical times, with the power of every fresh discovery. He does this in his poems and essays that are in no way inferior, in their linguistic beauty and breadth of associations. Both allow you to hear his own diction, calm, unaffected and legible. A second Auden? A Second Brodsky? Of course not! Each and every one of them was first. This is the awareness that Grünbein brings us with his writing – and in and with that he is also the first”.
Andrzej Kopacki, however, emphasizes that if in the first phase of his work Grünbein was “mainly a natural history expert, naturalist and anthropologist”, then “the defining moment of centuries bring a new quality to his lyrical work: substantial ancient cycles”. A brilliant dialogue with ancient culture can be found, amongst others, in “Misanthrope on Capri” a work inspired by the emperor Tiberius, that in 2012 brought its author The European Poet of Freedom prize; awarded by the city of Gdańsk. At the time, Krzysztof Pomian justified the jury’s decision: “Grünbein crafts a mirror from Roman culture, which he gives us, so that we can see the deficiencies, the crimes or misdeeds of our civilization. […] We read about Rome, but New York, or any other great metropolis, comes to mind”. The poet himself commented: “America is modern Rome. That struck me the most was when I stood on the steps of the Capitol building in Washington. It is the Roman Capitol from centuries ago”.
One might also add here that three years earlier, Grünbein together with Adam Zagajewski were laureates of the Samuel Bogumił Linde Prize, funded by the twin cities of Toruń and Göttingen.

Tomasz Różycki, poet and prose writer, juror of the Zbigniew Herbert International Literary Award, sums it up, “Grünbein is presently one of the most famous and appreciated German language poets, not only because of the value of his enormous creative output, but also because of the scope of his interests and the initiatives he has undertaken over the years. Born in the former GDR, he describes the experiences of the grey days of the ‘People’s Democracy’, the grey streets of a war torn Dresden reduced to ashes, but also the colourful chaos and ambiguity of the present. His poems, a mix of various styles of expression, from the most metaphorical to the colloquial and striking, with their ruthless directness, often take on boldly modernized, though fundamentally classic, literary forms: elegy, ode, sonnet, epic poem, prose poem. Grünbein, whilst staying close to modern life, comes into contact with art and philosophy, as if he had as examples the German language’s great predecessors: Hölderlin, Novalis, and Goethe. His poems are dialogues with the great: Seneca, Pascal, and Descartes. He constantly subjects existence to the scrutiny of poetic analysis, re-erecting a once destroyed bridge, linking poetry and philosophy; best seen in the widely commented lengthy poem about Descartes, which in itself is something of a mechanism, a kind of poetic machine serving reflection.
In this sense, Grünbein is also close to Zbigniew Herbert’s poetic tradition: universal culture is still a reference for him, a place where we all live, despite the passage of the years, changes in fashions and ways of communicating. It is also an inexhaustible store of questions that are still worth asking, a way of finding kinship in the face of a restless present. An element of permanence, something that, for a moment, allows us to forget about the time and space that divide us”.
Durs Grünbein himself believes that the poem is above all “an encounter with oneself”. The poet never completely forgets about childhood and does not give up on such qualities as “playfulness, love of home, curiosity about the world, hunger for myths and stories”. And yet poetry simultaneously precedes “all known structures of history and economy. It was present in the corner of the Stone Age huntsman’s cave, just as it is there now, in the cafeteria of a factory that makes jet planes. Thus, “only a society despairing of its own destiny, devoid of any desires beyond economic reproduction, could allow itself to cast in doubt the so-called difficult art of poetry”.